It’s a kind of magic

It’s Veil War Thursday, and that means Chapter 25 is here. Your teaser:

The black cloud sent tendrils of smoke like questing fingers toward the shimmering dome that Jerome had manifested. They touched and Jerome cried out in pain, bent over like he’d been gut shot. The apprentice slowly straightened. His dome stretched inwards, compressed not by force but by pure ill intent. There was a buzzing in the air, almost inaudible but unnerving.

Van Buskirk’s men were looking around for the source of the sound. Seeing nothing, they ducked their heads like they were expecting incoming fire. The malevolence in the air raked Lewis’ nerves. This was no magical version of artillery, lethal but senseless. He could feel, though he had no idea how, that something conscious and evil was outside that fragile shield. It was hungry and it wanted in.

Things are starting to heat up. As always, use the comments to point out errors, make critiques or just say random things to annoy people.

One other request: if the spirit moves you post links on your blogs and facebook wall. Pitch the story on your tv show. Incorporate it into your next movie. Ask your local representative to mention it on the floor of the House of Representatives. The audience for the Veil War has already grown far beyond what I expected. A huge part of that has been word of mouth (thank you all) and I’d like that to not only continue, but expand. Look at this way: the bigger my audience is, the easier it will be to sell this book. And the quicker I can become a full time writer and kick this stuff out even faster. So really, it’s in your best interest. 🙂

I’ve created a page to serve as a single home for all the maps that I post. Right now, it’s just what I posted earlier – the map of the Battle of Rafha and the link to the googlemap satellite view of the same terrain. However! I have more maps, and as the spirit moves me, I’ll post them as well. Insomnia will probably be a necessary precursor for that sort of spirit-moving as it was for this…

Here we are, and it’s Chapter Two Dozen already. You know, in base 12, that would only be 20? Teaser:

Odo neither jumped nor dove, but charged straight in. The sword came down and Odo twisted, spinning like a shot-putter to dodge the blade. He came out of the spin, planted his left foot and lunged, his sword arm to full extension as he thrust up to the giant’s waist.

The giant’s thick armor took the blow, and Odo’s sword shattered. The giant chieftain stood there, unmoved and gazing down at the tiny man before him, stunned and disarmed. He raised his sword.

As always, your comments and suggestions are welcome. Please join in the fun of pointing out my mistakes and errors – it’s fun for the whole family! The person who points out the most errors wins a prize.

Veil War Thursday has returned! Chapter 23 is now revised, updated, and rather seriously lengthened. This one’s a monster chapter at over 3000 words, so Merry Christmas! Ooh, I almost forgot the traditional teaser:

Once on the ground, the knights became a blur. Moving so fast that Lewis could barely follow their movements, the crusader knights spun, twisting through goblins who appeared almost frozen in place by the inhuman speed of their attackers.

Swords reached out, blurred fans of silvered metal to Lewis’ eyes. The power behind the strikes made them seem effortless, yet every time blade intersected with goblin, blood and limbs flew. Lewis had once watched a bird sucked in to a jet engine with less violence.

My lovely wife wasn’t available to do her normal copy-editing, so this one is likely a little rough with the goofs and typos and grammatical infelicities. Your help in ferreting those bastards out is of course greatly appreciated.

After my little break, I’m trying to move as quickly as possible through the rewrites of this battle. There’s lot’s more cool stuff coming – I think you’re going to like where it ends up. And of course, I am also working on the rest of the novel – the part that you aren’t seeing, and that takes place for the most part back in the US. I might have some questions for you all on that – some feedback might be a useful reality check for some of what is happening there. But more on that later.

I’ve been hearing complaints. Ok, ‘a’ complaint – that the action in this battle is somewhat confusing. Well, there’s a lot going on and it is often difficult to keep it straight myself. So, here then is a sketch map of the general outlines of the battle: 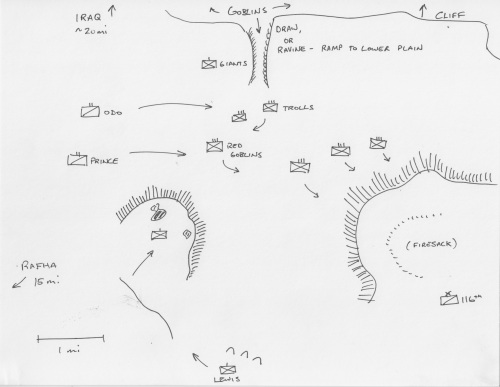 Here you can see the two hilly areas where the Snake River Brigade and Lewis have taken positions. The little thing in the middle at the bottom is the gun emplacements that Lewis happened upon right at the beginning, and then the line to the left is the ravine that he followed to get to his low hill.

The Prince and Odo came in from the left or west. The goblins and other beasties are coming up the ravine, a natural ramp through the cliff. Several regiments attacked the 116th, and you can also see the initial positions of the goblins, trolls and giants that the crusaders are fighting. I didn’t include it, but the dragon would have come in from the middle of the right side of the map, flown along the north edge of the hill, turned north, got shot, and aimed back at the 116th before being drive off.

Another note: this terrain actually exists, more or less I’ve drawn it here. Google maps set to satellite view is a remarkable thing.

New episode of the sword story is up.  Read it here.

Part two of your bonus story is up – Trade Negotiations.

One note about these bonus stories. I am not putting as much effort into them as the main story – they probably never will be as fully developed. When I was laying down the back story I realized that this one thread had a sort of narrative of its own, and I’ve put a little flesh on its bones. I also don’t want to give away too much of what will happen later, but these stories will provide some (hopefully) tantalizing glimpses of places, peoples and things that will be of great importance later.

As promised, here’s some more words. This is the first chunk of Chapter Twenty-Three. (When it’s all up, I’ll smash them back into one post.)

This is probably all I’ll get out today, but tomorrow should see unprecedented (by the standard of the last couple weeks, anyway) productivity. Sunday I’ll be driving back to PA to administer last rites on the suburban, which will mean ten hours of driving.

This is me for the last couple weeks:

Well, the trip to Ohio was excellent up until the moment when my suburban threw a rod.

I’ve had a grand total of maybe two hours in the last couple weeks to work on the story. Which sucks for me and you both. But, I did accomplish some things, and more will be accomplished in the very near future. In a slight departure from my normal mode, I’m just going to start posting stuff as it gets edited and not wait for the full thing.

So, at random intervals over the next week, you’ll be getting chunks of the Chapter 23 and 24, and as well – because I love you so dearly – bits of a bonus story. I will do this until I’ve caught up a bit.

The first bit is part one of… the back story of Lewis’ sword. Read it here.

Chapter 22 is up. I apologize for the week-long delay, but life got a little crazy. You may have a surprise later, though. Teaser:

Lewis saw the standard bearer he’d watched a second before tossed backward as if he’d been hit by a giant, invisible tsunami. A half step and a half second behind him, the rest of the first goblin rank was pushed inexorably and violently backward, crashing into the ranks behind as all were swept away.

It took another second before the wave hit the dragon. The dragon went from graceful and malevolent flight to sparrow in a hurricane. Again the dragon screamed in rage as it was forced from its prey.

It has been frustrating to write – or try to write – compelling prose about people watching a battle. But that is just the nature of the thing, and Lewis can’t be everywhere. Very shortly, though, the battle will be coming to Lewis. As always, please note any errors or inconsistencies, and let me know what you think about how the story is developing. Your feedback has been crucial, really, in allowing me to achieve even the modest level of quality I have.