I’ve long been fascinated by steampunk, so it is perhaps strange that I’ve read so little of it. The first steampunk novel I ran across was The Difference Engine by Gibson and Sterling. I read it because of the authors’ previous work, but loved the world they created, a world where Babbage’s engines created a world infested by computers a hundred years ahead of schedule. There is something about the Victorians, a something that Neal Stephenson captured in a book set not in their own era but in the future. The Neo-Victorians of the Diamond Age were a conscious reaction to the follies of our era. (And if you read closely, the grandfather and Equity Lord who is the instigator of most of the action in the story is probably about 40 right now.)

While we may like the clothes, the industrial design, the steam engines; what fascinates me is Victorian confidence, the assuredness with which they lived. They knew they could solve problems, conquer worlds. And so they did. Our modern temporal parochialism insists that because they did not share our concerns they were benighted, bigoted, backward. So what would they do if they had mechanical computers, airships and Tesla death rays? Fascinating things.

Madeleine, though, is looking at other aspects of the Victorian Era. And between this entry and last week’s, I have a lot of steampunk to read.

When Stephen asked me to write this blog for his website, he seemed to be particularly excited this week’s guest would be talking about a webcomic.  I secretly think all he wanted was the pretty pictures and I’m happy to oblige. But be forewarned, writers are writers no matter medium we write in. However, I digress…

BOSTON METAPHYSICAL SOCIETY (“BMS”) is the name of the webcomic and for those of you who are not familiar with it the story is about an ex-Pinkerton detective, his medium/spirit photographer partner and a scientist who battle supernatural forces in late 1800’s Boston. Yes, ladies and gentlemen, it is a steampunk webcomic though in some circles it has been called steamgoth. (Think steampunk with paranormal elements.)

What the heck is steampunk, you ask? Well, some people define steampunk as late 1800’s Victorian science fiction, i.e. Jules Verne. However, I think it evokes the time period in fashion, culture, technology and innovation. I also don’t believe it has to be set in Victorian England. If you do a search on Google, you can find steampunk stories and fashion that are influenced by other cultures and geographical locations. For instance NEXT TOWN OVER is a western steampunk webcomic. On Facebook, there are steampunk groups from every point on the globe. It is probably the most inclusive genre I’ve ever worked in but most of all, it allows people to be creative and express themselves as individuals without any hard and fast rules other than it must vaguely relate to the Victorian era.

I fell into steampunk by accident or rather it almost fell on me in the form of a former UCLA classmate by the name of Alex Diaz. He was in the MFA directing program while I was in the MFA screenwriting program and we met in a TV development class. I was developing BMS as a TV Pilot when he dropped down next to me on the couch in Melnitz Hall and uttered the words, “Steampunk.”  My reaction was like “OK and that’s supposed to mean???” He explained it and said he thought BMS should be set in a steampunk world. I thought it sounded interesting, so I did a lot of research, reading and determined he was right. I’ve been a huge science fiction and fantasy fan since my mom read me A WRINKLE IN TIME as a kid, so steampunk wasn’t really a stretch. I’m also a fan of period drama and watch BBC productions religiously. So, I re-developed the story and eventually adapted into it a six-issue comic mini-series.

All of the above is the short version of what you see on the website or the print edition on how this story came to pass.  However, the themes and issues dealt with in the comic have as much or more to do with my own fascination with class distinctions and social mores than anything else.

Characters who are derived from different classes have built in conflicts which are a huge plus for a writer. Societal expectations are different for the men and women of each class. Two very good examples of this are the TV shows SPARTACUS and DOWNTON ABBEY. How can you dare put these two shows in the same sentence, you ask? One excels in blood, lust (and blood lust) hard bodies and lots of naked people with a show which has very pretty polite people who remain fully clothed and generally argue over tea (except for the WWI scenes).  Easy, like BMS they are about class distinctions and expectations.

Spartacus and his people are slaves who are fighting their Roman overlords for freedom.  Their society expects slaves to do what they are told and can be bought and sold on a whim. However, even among Roman society there are cultural and societal expectations for men, women, sons and daughters. To challenge these rules of society usually results in something bad happening. In Spartacus’s world to challenge usually results in death. For Romans, the result can also be violent if a wife or child challenges their husband/father who is the defacto representative of Rome within the household.

The society and culture at DOWNTON ABBEY also has a clear set of rules. Don’t date the help. Marry within your class. If you’re a woman, you cannot inherit. If you’re an aristocratic man who can’t afford new plumping for the estate, forget about marrying for love you have to marry money. Arrogance and political position will often ride roughshod over any who think differently.  Here, the Earl is the defacto representative of the crown who is the one who decides the family’s fate.  Obviously, the Earl’s character is not one to lop off heads, but his influence is just as powerful as any Roman patriarch.

I’m not here to yammer on about the evils of patriarchy because many people, before and after us, find great comfort in knowing where they belong in the scheme of things. They wouldn’t dream of challenging the status quo because it tells them how to behave and what to expect from life. However, when those expectations are not met then you might run into a revolution or two.

All of the lead characters in BMS have or will challenge the social norms for the day. That is one of the most fun things about writing them. If they stayed put and led a “normal” life for someone of their class there would be no story. These characters are firmly grounded in their class yet on occasion they challenge it. Sometimes they will be rewarded for it, but they will also pay a price. Maybe not now, but later.

One of my favorite panels (see below) is after Caitlin curtsies to Granville and his response. For one brief moment she has crossed racial barriers and given him the respect he deserves, not only as an educated gentleman, but as a courtesy to a fellow human being. He responds in kind even though she doesn’t believe she deserves it. 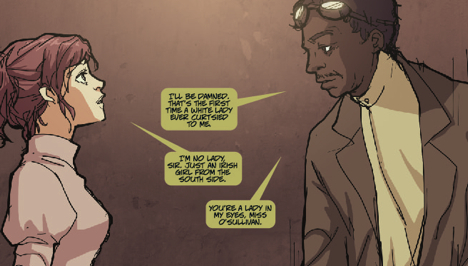 Another panel demonstrates the utter disregard of Jonathan Weldsmore for his servants’ well-being. His only thought is for his political and social standing.  The next panel (not here) shows Caitlin becoming angry, but she can do nothing about it.  Though she is a necessary to these people, her presence is neither wanted nor desired for three reasons: wrong class, wrong gender and she has psychic abilities. 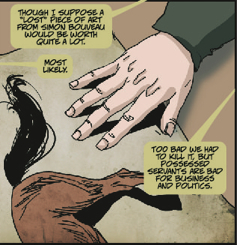 Even Samuel is caught between a rock and a hard place because of his social standing. 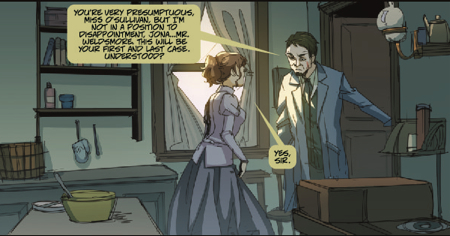 In future chapters, we will see more of Caitlin’s mother, Erin, who is so entrenched in her social class that she will do anything to stop Caitlin from “over stepping.”  Members of B.E.T.H. will also challenge and be challenged by their own prejudices and presumptions.

Class defines how we were raised and our world outlook.  It is a theme that has bled into almost everything I have written including the novellas.  My question to you is what themes have permeated your writing and where did they come from? Understanding that will help you be the writer you are meant to be.