What’s another word for Bigfoot?

Bigfoot. Sasquatch. Yeti. The Abominable Snowman. Whatever you want to call it, such a giant, mythical ape is not real-at least, not anymore. But more than a million years ago, an ape as big as a polar bear lived in South Asia, until going extinct 300,000 years ago.

Scientists first learned of Gigantopithecus in 1935, when Ralph von Koenigswald, a German paleoanthropologist, walked into a pharmacy in Hong Kong and found an unusually large primate molar for sale. Since then, researchers have collected hundreds of Gigantopithecus teeth and several jaws in China, Vietnam and India. Based on these fossils, it appearsGigantopithecus was closely related to modern orangutans and Sivapithecus, an ape that lived in Asia about 12 to 8 million years ago. With only dentition to go on, it’s hard to piece together what this animal was like. But based on comparisons with gorillas and other modern apes, researchers estimate Gigantopithecus stood more than 10 feet tall and weighed 1,200 pounds (at most, gorillas only weigh 400 pounds). Given their size, they probably lived on the ground,walking on their fists like modern orangutans. 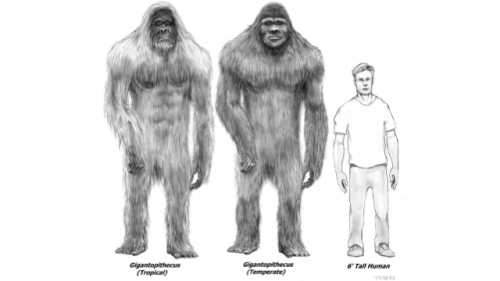 From evidence collected from the teeth, it appears that the bigfeet were probably plant eaters. But throughout the world, plant eaters are some of the most dangerous animals going. Hippos kill more people than lions, fer instance.

What other names do we have for very large humanoid creatures?