George O’Har has a special place in my heart, because he is the first actual, published author to talk to me and say anything besides, “You’re in my way.” In this week’s Big Idea post, George explains that The Thousand Hour Club is more than a road novel. An attempt to respiritualize the American experience is a bold endeavor, but one that has noble antecedents. Tolkien consciously envisioned the Lord of the Rings as a new myth for the West, a founding myth to recenter and correct modern life. A road novel might not aim for the same place in the pantheon but where are today’s lives of the saints? Perhaps a road novel is a good way to sustain – or having lost, recover – the faith in founding myths.

A Big Idea Disguised As a Small Idea, Or Isn’t It Pretty To Think So?

I first started writing The Thousand Hour Club over a decade ago. The plan for the novel was to base it on my own life experiences, a plan that involved using carefully selected moments of my life as a civilian and then move on to what happened, again using carefully selected moments, when I joined the Air Force. I did not think life in the military would be the focus of what I wrote, but that’s how it turned out. The story never did have much of a plot. Essentially, I was telling a tale about a basically good young man growing up in what I believed then and believe now is the best country in the world: America. My thinking was that if I told the story well-enough, and used humor and a strong central character as ‘literary devices,’ much like Twain and Joyce used similar motifs, readers would come along. Editors and agents in New York, of course, never much went for my approach. But why they didn’t is a topic for another time. 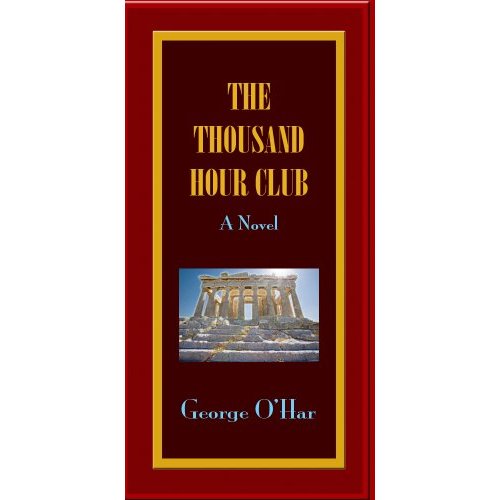 Over the years, I rewrote the manuscript, start to finish, seven or eight times. I did the usual things writers do. Then one day, at lunch with a Jesuit friend of mine, we got to talking about how America was losing contact with its “unifying symbols,” and that a nation separated from the clarifying power of what had made it great in the first place might well be doomed. In the middle of this conversation—I remember it to this day—I was struck by the idea that that was exactly what I was attempting to do in The Thousand Hour Club: reconnect America, through the peregrinations of its ironic and likeable 1st-person narrator, to its symbolic bases. In short, I was building a bridge to the past. Important to note here is that the narrator is not aware of this; he feels himself changing, being worked on, but he never articulates it.

What do I mean? The novel starts out in Fort Lee, NJ; it ends at the Acropolis. The town of Fort Lee is named after a Revolutionary War Fort. The Acropolis was in addition to being a sacred place also a fort, a military installation. My narrator ends up in Greece. In thinking about symbols, this becomes important since the idea of Greece exerted enormous influence on the Founding Fathers. You can see it in their writing and thinking, and in the buildings they designed. Now, I wasn’t quite using symbols the way Melville and Hawthorne did, but I was using them. This doesn’t happen much in contemporary writing for the simple reason that most American contemporary writers have completely forgotten about the symbols that used to mean so much to us. Like everyone else, writers assume what we have will always be there. They have forgotten the idea that what we have needs to be fertilized and maintained.

Here’s another example. Socrates is practically a character in the book. The Socratic notion of the primacy of the unseen wends it ways through the novel, through moments as mundane as heartbreak, or as serious as a death in the family. The very last scene in the novel has the narrator leaning against a tree in the Agora. He hears two Greek boys running. One of them hollers to the other, “Socrates! Socrates!” I won’t beat this into the ground, but this is a lovely solution to a problem: how can I get readers to believe Socrates is as vitally alive and important today as he was in 5th century Athens? By having the narrator hear his name now in the exact same place his name was spoken centuries ago when he was teaching.

I was strongly influenced by Twain and Kerouac, so it will come as no surprise that The Thousand Hour Club is a road book. On the Road can be seen in a variety of ways, but I tend to see the novel as Kerouac’s attempt, through Sal and Dean, to respiritualize America. Kerouac uses Buddhism. So do I, as well as Christianity and Islam. Kerouac, and not just in On the Road, uses elevation as a symbol for awareness (like Mann). The notion of moving characters up and down—on mountains, in aircraft, crossing bridges—is how this idea shows up in The Thousand Hour Club, which is very much and deliberately a spiritual novel.

Now, many folks who read the book will glide right past this idea of reconnecting to America’s symbolic past. Readers would not be likely to overlook the spiritual angle, since nature and the idea of sacred places and spirituality per se (the presence of three major religions) run through the novel like a river. Anyway, I just started out telling a story. What I ended up with, I hope, is something better and more enduring. How this happened is almost entirely by accident. I didn’t deliberately set out to do any such thing. I wanted to make readers laugh and feel good.

Yet when I looked back at my work in progress after lunch with my Jesuit friend I realized the ingredients were all there. I just hadn’t seen them. All it took to emphasize them was a bit of tweaking. So when people say they think Herman Melville set out in Moby Dick to write a symbolic tale of a ship that stands for America, and a whale that probably represents nothingness, I wonder. What are the odds that he simply wanted to tell a story based, to some extent, on his own life and travels? And that later on, when he was reviewing the situation, he understood that he had accomplished something bigger. Hey; I’m just guessing. But I’m looking at Melville as a writer. I’m not a critic trying to demonstrate my importance.

And finally, a basic problem any writer has in putting together a book is how to make it deeper (if deepening is your aim). What experience has taught me is that this deepening process is only available to the writer through rewriting and revising. It is not something that can be jammed into a novel. You can’t say, I’m going to write a novel about Truth, Justice, Racism, or Love. If you’ve told an accurate story, gotten the details right, you may when you’re panning for these deeper things (Truth, Love et. al.) actually find them. The deeper stuff rises to the surface. It comes up naturally. It is an effect, a result. It is almost never an input.